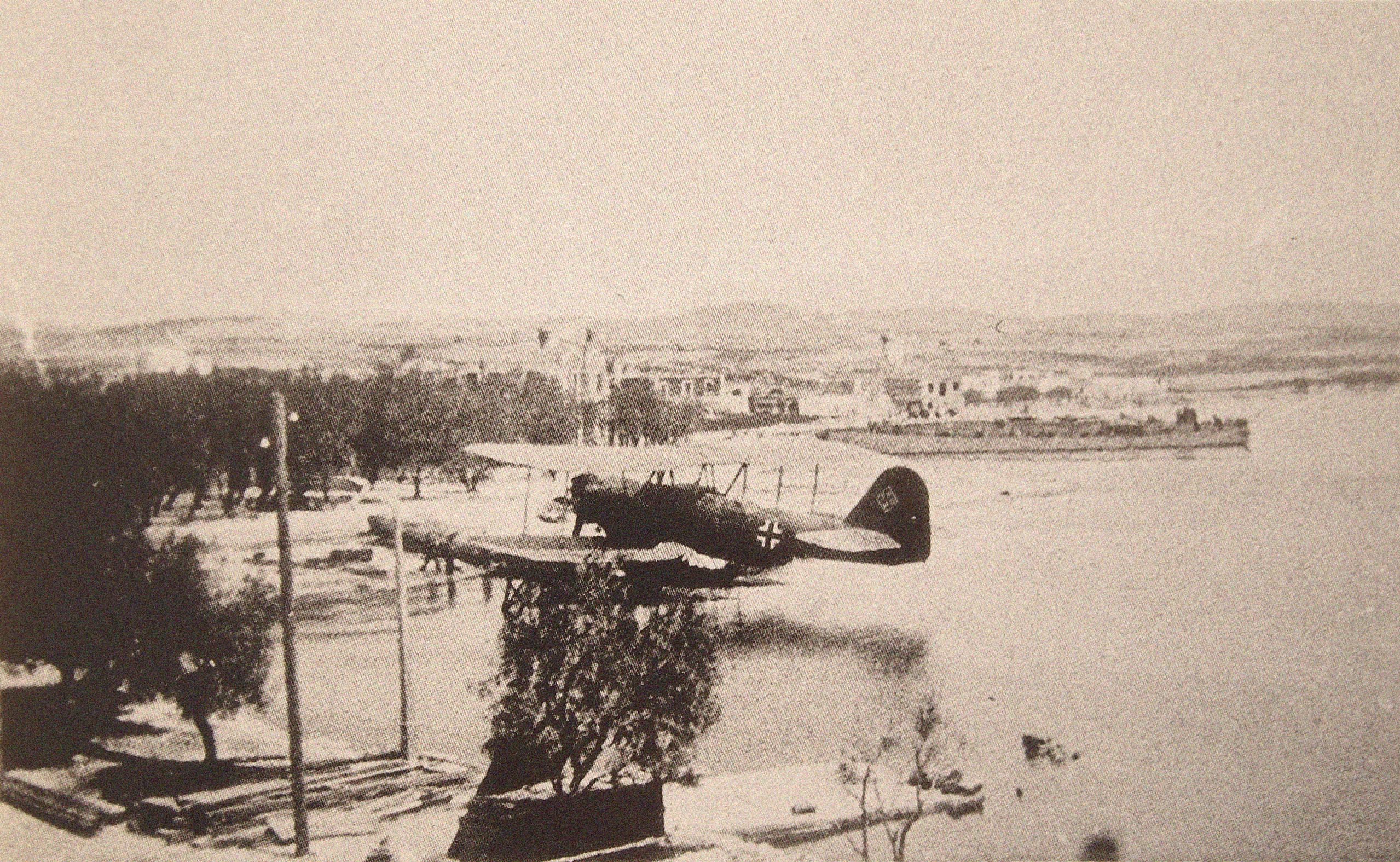 A German seaplane stranded on the beach where the Adamas Memorial is now located. A little farther a landing craft unloads supplies in front of the shacks of the Food Warehouse ("Verpflegungslager"). 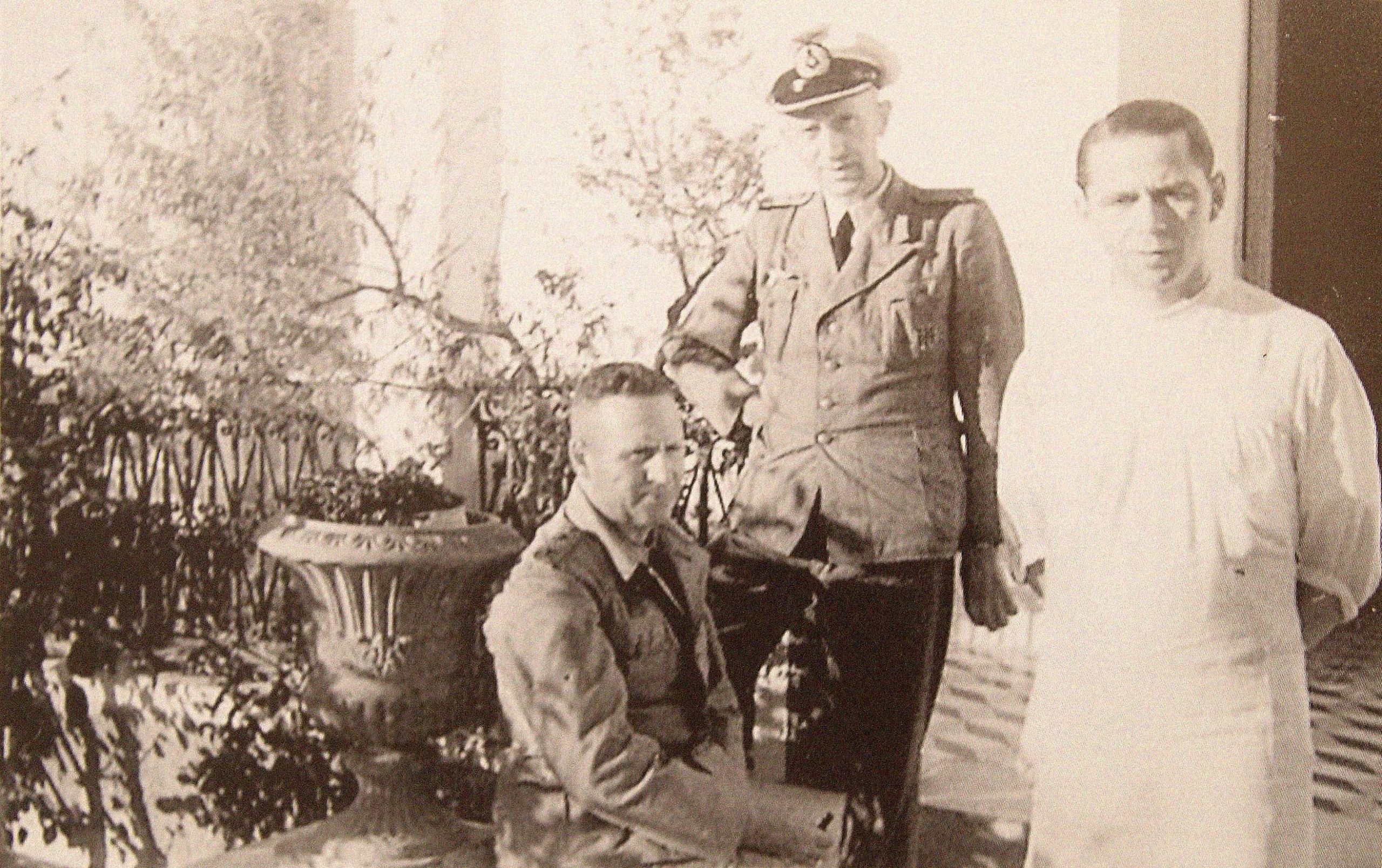 The Commander of the Milos Garrison, Captain von Stockhausen, standing on the left, while visiting the military doctor Hans Loeber (on the right, wearing the medical apron) at the occupied house which was allowed to Loeber for staying.

Milos was occupied by the German Wehrmacht for four years and three hours, the occupation lasted from May 9, 1941 to May 9, 1945. The extraordinary thing: Milos was one of the last occupied bastions next to a region on Crete (and some other Greek islands) where the Germans stayed in Europe. Milos was considered an important bridgehead for the German Wehrmacht and for Hitler's plans for world conquest. Milos was strategically and geographically important, being midway between the Attic and Cretan mainland. Crete was resupplied via Milos, and Crete was crucial for policing the south-eastern Mediterranean. Towards the end of the war, the remaining German soldiers fought fierce battles with units from the Greek and English armies to defend and recapture the island. "Almost daily air raids", says the diary of a German soldier in March 1945. The English flew air raid after air raid, there was destruction and direct hits, landings, hand-to-hand combat, deaths. German soldiers defected and deserted, but more than five hundred of them got stuck on Milos, barricaded themselves, fought and defended themselves to the last. On May 8, 1945, the German Wehrmacht capitulated, in the Bay of Polonia, opposite Kimolos, the "surrender negotiations" took place. On May 12, the last German soldiers are taken to Piraeus on an English warship. The "War Museum" of Milos commemorates those years. It is located below the island's capital, Plaka. It is set up in the preserved historical rooms, which were expanded by Greek workers in 1943/1944 under the supervision of German occupying soldiers. During the first two years of occupation, the Germans did not build any special fortifications in Milos. On February 18, 1943, fourteen days after the defeat of Stalingrad, Reich Minister of Propaganda Goebbels called for "total war" in Berlin. From then on, the German positions on Milos were expanded and fortified. Massive bunkers and cannon systems were built to protect against a possible Allied landing. 2 Workers from Milos and Kimolos were used as forced labourers. From June 1943 to the summer of 1944, many construction sites were set up on the island under the supervision of German engineers, officers and non-commissioned officers. Shelters, bunkers, radar and searchlight systems, cannon positions, an underground telephone exchange, crew quarters, food and ammunition depots were built. The tunnels in "Flaris" below Plaka, which now houses the Milos War Museum, were also created at this time. It was originally intended as an underground backup hospital, particularly in the event of bombing raids. Begun in the last months of 1943, construction in the rock was completed in mid-1944. At that time, around 4,000 German officers and soldiers were stationed on Milos. From the autumn of 1944, British units flew daily low-level aircraft raids, bombarded and fired on aircraft carriers and warships. There was bitter fighting for the island. The Plaka military hospital therefore had to be relocated to the Flaris underground tunnels at the end of 1944 and remained there until March 1945, two months before the end of the war. Shortly after the end of the war, the former reserve hospital was looted. After that it remained closed for 69 years. Since the spring of 2014, the Milos War Museum has been located in the originally preserved old tunnel construction. Inside rooms. The underground reserve hospital in the “Flaris” tunnel consists of two long corridors for entry and exit, two large rooms for patient beds, a narrower room and three smaller adjoining rooms for storing hospital equipment. The walls of the tunnel, dug into the rock, are lined with concrete blocks made by local Greek workers. The roof of the two main halls was also covered with concrete blocks, which were arranged in an arch to be better protected against bombing raids. Although it has now been around 80 years since construction work was completed, the premises are in excellent condition. The Museum. In May 2014 the "Milos War Museum" was inaugurated. The initiative came from Grigoris Belivanakis. For decades, the journalist, writer and chronicler of the island has collected materials, documents and eyewitness statements on the occupation of Milos. In 2011 he published a comprehensive book on the subject, 3 which so far is only available in Greek. (Grigoris Belivanakis: The Germans on Milos 1941-45. Athens 2011) A German and English translation is strongly recommended. Since 2014, a photo exhibition from the Belivanakis archive has been on display in the rooms of the historical tunnel construction (some photographs from the First World War and primarily those from the Second World War in Milos) as well as material donated to the museum by individuals. Among them are cots, weapons, plans, maps, documents, medical equipment. A box of honor is set up for the fourteen executed Greeks of February 23, 1943. The order of the German commander Hans Kawelmacher is also issued there as a document and can be read verbatim. "To the people of Milos", reads the official letter: "I have..." The list with the fourteen names follows: "...have been summarily shot for stealing and plundering German Wehrmacht property originating from the steamer 'Artemis'". A war crime committed in the spirit of "total war" that went unpunished. The German commander, Hans Kawelmacher, was commander on Milos from 1942 to 1943, after the end of the war he went unpunished. Never again war!" is the slogan that Grigoris Belivanakis (1929-2020), the museum's founder, always emphasized in his lectures and writings. 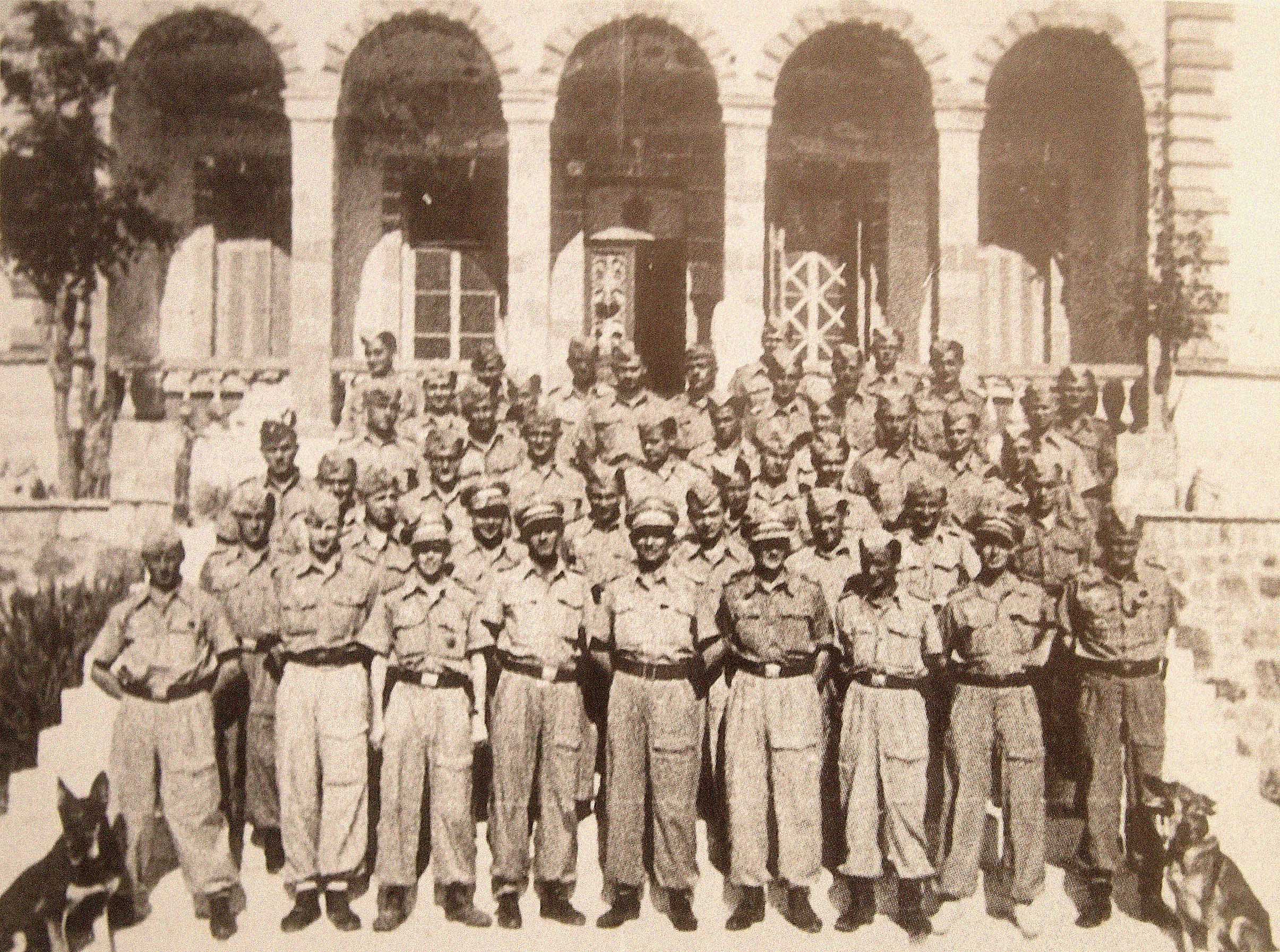 Therefore stands the history and work of the German surgeon Dr. Hans Loeber. There is an extra chapter about him in the exhibition. Löber had been transferred to Milos in June 1943. He was a military doctor ("staff doctor") - and at the same time full of Christian feelings. So he not only treated Germans, but also Greeks as a matter of course. He saved the lives of many people on Milos and was held in high esteem by the population. Even today, people remember with gratitude how well they were treated by Dr. Hans Löber were taken care of. On December 5, 1944, Löber died alongside the German commander, Bernhard Kuhn, in an assassination attempt by the "Holy Brigade" (Ieros Lochos). Löber's legacy and philanthropic activities are still honored on Milos today. (Cf. Hanns-Georg Löber, Gregory Belivanakis: Der Doktor Hans Löber. Briefe aus Milos, 1943-1944. Athens 2014) The house where Löber lived during the war years can still be seen today (in May 2022). It's on the corner of the street by the War Museum, across from the OTE building, empty and half in ruins. 4 Historical sites on Milos. (A selection) The remains of German cannon positions and crew buildings can still be seen in various areas of Milos. In the north of the island, in Tráxyla, on the plateau there are the foundations of four gun positions, anti-aircraft defence, anti-aircraft positions and (on the eastern side of the hill) several crew buildings. The area is criss-crossed with trenches, underground passages connect caves and command posts, the entire hill is developed as the foremost battle position in the direction of Piraeus // Athens. Kórphou, above the bay of Adamas, with a view of the Prophet Elias: Huge concrete elements lie on the edge of a field, they are the rubble of the bombed-out German position. On January 16, 1945, the gun emplacement in Kórphou was bombed and completely destroyed; a bomb crater can still be seen, the concrete debris is widely scattered. Here, too, trenches can be seen on closer inspection, shelters in front of caves, burrows, and the remains of bunkers. On the way to the airport, the memorial for the fourteen executed is located at a small chapel. It was at about this point that the arbitrary executions took place. A German transport ship was bombed by British planes in the bay in February 1943 and ran aground. After that, some Greeks inspected the washed-up goods on the beach. The population was starving. The German commander, Hans Kawelmacher, punished it as looting and arbitrarily selected fourteen Greeks for summary execution. The German logic behind it: fourteen Germans had died on the ship from English bombs. So fourteen Greeks had to atone. Agriócastro: Ruins of the former radar station of the German Wehrmacht. Below the hill there are gun emplacements, developed caves and shelters for soldiers scattered throughout the area. Tópakas: In the very west of the island, on the side of Mount Prophet Elias. Ruins of another German Wehrmacht position: former crew quarters, bunkers, shelters; developed caves. The remains of a radar system are rusting in a depression. 5 A commemorative plaque at a lookout point for German soldiers, possibly the former gun emplacement, commemorates four British soldiers. On November 13, 1944, two British boats landed in Cape Psali. Twenty-seven British soldiers wanted to take and conquer the radar station of Tópakas. A daring and crazy enterprise. The war in southern Europe was actually already history, Athens had been liberated for four weeks, Thessaloniki for a fortnight. The ascent from the bay to the position on the hilltop is extremely steep, the English failed. "Rejected in close combat", a German soldier wrote in his diary, "four fallen English soldiers remain behind." The commemorative plaque has been reminding us of this for a few years. Access to the ruins is behind the monastery of Agios Jannis. There is a small wooden sign showing the way. 1300 meters are given as the distance. It's a fairly challenging hike through wild natural terrain, taking about an hour to climb. The route is marked by rock formations. On closer inspection, you can also see other shelters, caves used by the military, command posts, and every unusual rock formation offered German soldiers an opportunity to take cover and monitor the sea unobserved. The remains of another radar station can be seen on the south side of Milos above the bay of Provatas. A major construction project is announced for May 2022, and the relic, which has almost become a kind of landmark over the bay of Provatas, may disappear. Since 1980 there has been a memorial on a peak near Triovassalos, commemorating the leader of the "Holy Brigade", Vasilis Papajannakos, and the fourteen Greeks who were executed in February 1943. The assassination attempt on the German commander Bernhard Kuhn was also due to this “holy brigade”. He and the "good doctor", the German doctor, Hans Löber, who had helped many Greeks, and three other people died in December 1944. The leader of the Holy Brigades, Vasilis Papajannakos, also died in this partisan attack. (Cf. Hanns-Georg Löber, Gregory Belivanakis: The Doctor Hans Löber. Letters from Milos, 1943-1944. Athens 2014) 6 Various bunkers are scattered all over the island, for example on Mount Plaka, in Peratriovassalos, in Triovassalos and elsewhere. The largest bunker in Adamas, which tunnels the entire site, is used for exhibitions and is partially accessible. Guided tours to the ruins are being prepared and will soon be offered by locals in English, Greek or German. 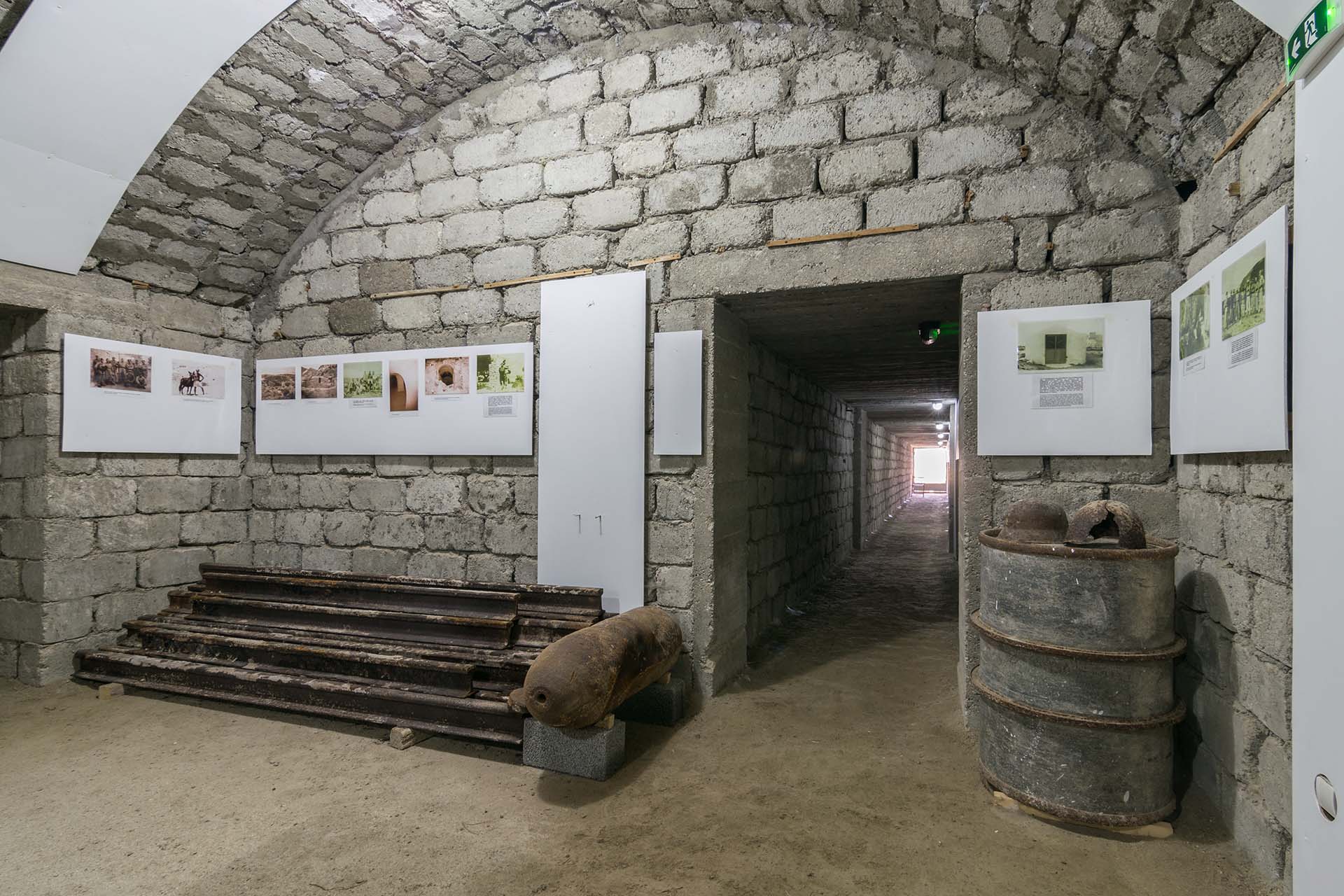 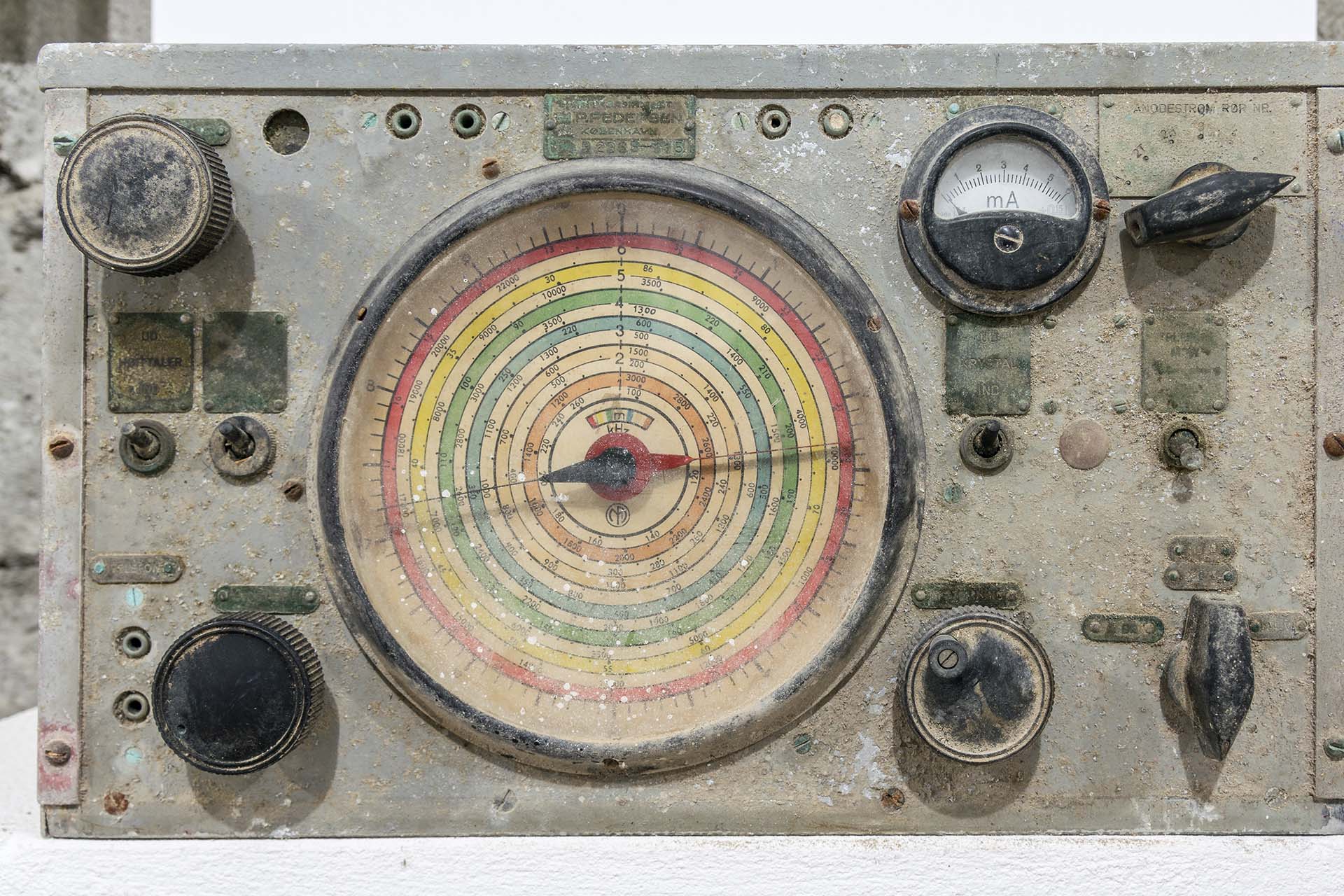